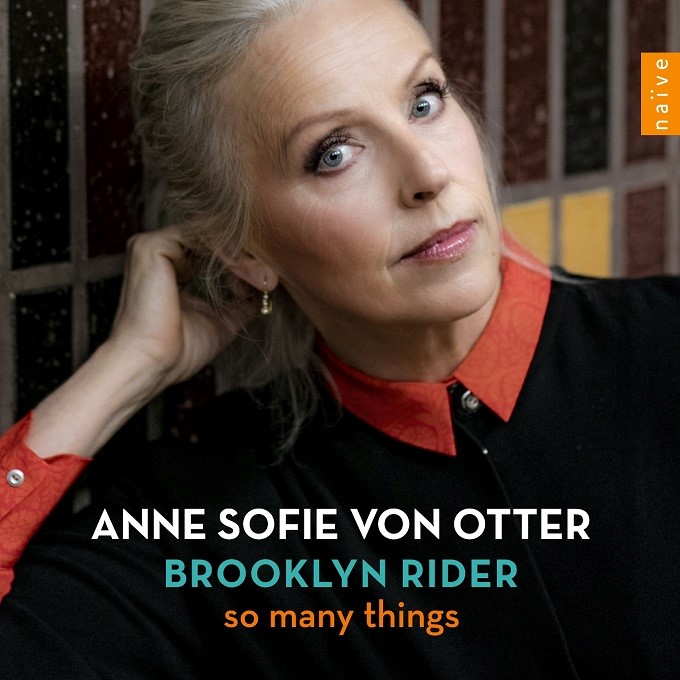 Brooklyn Rider, the game-changing string quartet hailed as “the future of chamber music” (Strings), releases a new album with Grammy Award-winning Swedish mezzo-soprano Anne Sofie von Otter on Naïve Classique on September 30. The album juxtaposes the music of selected classical composers, who share what von Otter calls “anything from a toe to a whole foot in the world of popular music and jazz,” with that of adventurous popular composers with a well-documented interest in classical music. Included are works by Nico Muhly and Anders Hillborg; new compositions, specifically created for the project by Pulitzer Prize-winner Caroline Shaw and Brooklyn Rider violinist Colin Jacobsen; and specially commissioned arrangements of pieces by John Adams, Elvis Costello, Rufus Wainwright, Sting, Björk, Kate Bush, and Brad Mehldau, who also collaborated with von Otter on her 2010 album, Love Songs. Brooklyn Rider tours with the mezzo to support the new album this fall, both in Europe and the U.S., including an October 13 date at Carnegie Hall.

Last summer, during the farewell season of Brooklyn Rider’s ten-year-old Stillwater Music Festival in Minnesota, the ensemble’s performances of material slated for So Many Things were an outstanding highlight. As the Star Tribune reported: “For some, the main attraction of the evening was the eminent Swedish mezzo-soprano Anne Sofie von Otter. … [who] brought … a voice subtly modulated from its operatic origins into that of a creamy chanteuse.” The mezzo described the experience in liner notes for the recording:

“Brooklyn Rider have been the most wonderful of partners. … We initially met in New York to discuss the project, [and] subsequently sent endless emailed ideas and sound clips back and forth to narrow down the programme choices before our first rehearsal together in Stillwater, Minnesota in a log cabin by a little lake. It was an idyllic and perfect setting for concentration and creative thinking. “

“Working with the incomparable Anne Sofie von Otter has been a near constant reminder that there is nothing quite as expressive as the human voice. … In our experience, it is almost always in the reaching between two mediums where the interesting ‘stuff’ happens.”

As Brooklyn Rider explains, in summing up So Many Things, the music is “a constellation of diverse songs and compositions whose only prerequisite for inclusion was that the music touched an emotional chord for us collectively.” Von Otter more than confirms this assessment:

“The music that speaks to me … has to be driven by human emotion, it has to be so much more than a technical or intellectual travail. … On So Many Things, we are bringing together music from two worlds although I don’t really see them as two worlds at all, it’s all just music – really good music! ”

Are you interested in a career in the arts, public relations, and digital media and want to learn the inner working… https://t.co/tLnvIEzto6