ANIM students and families during the evacuations this past fall. Pictured top right, Zohra and Farida were the last two students to join the evacuated community in Qatar. (All photos courtesy of ANIM. Click here to download with credits.)

Since the Taliban takeover on August 15, the future of Afghan music has hung in the balance. Yesterday (Nov 16), however, the last members of the Afghanistan National Institute of Music (ANIM) were airlifted from Kabul to Doha, Qatar. There they rejoined the ANIM students, faculty, staff, and immediate family members who were rescued in recent weeks, including the famed, all-female Zohra orchestra. The 272 members will continue to Portugal, where the school will be reconstituted. The rescue to Doha and reestablishment in Portugal will secure the future of Afghanistan’s rich but beleaguered musical heritage.

For ANIM, yesterday’s airlift was the last of five since October 2 and completes the school’s exit from Kabul. Collectively comprising one of the largest group rescues of at-risk Afghans to date, this auspicious development marks the most recent step in a long and complex effort, made possible by the State of Qatar, which provided aircraft, diplomatic assistance and temporary accommodation, and the government of Portugal, where ANIM community members have been granted group asylum. Other key players include cellist Yo-Yo Ma, conductor Daniel Barenboim, and other members of the artistic community; a bipartisan group of U.S. lawmakers, including Senate Majority Leader Charles E. Schumer (D-NY), Senator Bill Cassidy (R-LA), House Speaker Nancy Pelosi (D-CA), and Representative Liz Cheney (R-WY); and leading philanthropists, diplomacy experts, military veterans and pro bono lawyers.

Her Excellency Lolwah Alkhater, Assistant Foreign Minister of the State of Qatar, comments:

“As part of its continued airlifting efforts from Kabul, Qatar has secured the safe passage of the last members of the Afghanistan National Institute of Music, who arrived safely to Doha on a Qatari charter flight yesterday. Qatari officials have worked closely with ANIM’s management to safely evacuate 272 of their members over the past few months. We are happy to host them temporarily in Doha and wish them the best of luck in their future. We hope that the future of Afghanistan will be prosperous, inclusive and encouraging for those who left to return home.”

“Now that the last two students have been reunited with the rest of the ANIM community, I am extremely pleased to see that the hard work of everyone involved in rescuing our young and master musicians has finally paid off. Today we celebrate their freedom to make music, continue their education and safeguard the rich musical tradition of Afghanistan in exile, while sharing its beauty with the rest of the world.”

The rescued ANIM community encompasses both master musicians like Ustad Rasool Azizi, who at 85 years old is a leading exponent of traditional Afghan music on the tanbur, and 125 students including violinist Gulmeena Khushdi, aged 20, who says:

“The Taliban took away our freedom and all our rights. We did not even have a safe place to live. Now we have our freedom back, I hope to live my life and pursue my dream of becoming a successful musician.”

“I got my hope and my dreams back. It is hard to be away from your motherland and loved ones but being alive, and able to preserve the musical heritage of my country, makes me happy.”

Since 2010, when Dr. Sarmast first founded it in Kabul, ANIM has become internationally recognized as “a great success story in the effort to renew cultural life and the arts in Afghanistan” (NPR). The war-torn nation’s first and only music school, it gave Afghan boys and girls the rare opportunity to learn side by side, and to study both Western and Afghan music, while also receiving a general education. Ensembles from the school, including the Afghan Youth Orchestra, National Symphony Orchestra and Zohra, undertook high-profile international tours, sharing the unique musical traditions of their homeland with enthusiastic audiences at the World Economic Forum in Davos, New York’s Carnegie Hall, Washington DC’s Kennedy Center, London’s British Museum and other prominent venues worldwide. As Polar Music Prize managing director Marie Ledin said in 2018, when awarding that honor to ANIM and Dr. Sarmast:

“Dr. Ahmad Sarmast founded the Afghanistan National Institute of Music to restore the joy and power of music to children’s lives. ANIM’s work with young people and disadvantaged children is truly inspirational.”

It is this vital work that stands in jeopardy. By contrast with the 1990s, when music in Afghanistan was explicitly banned, today the Taliban has yet to issue any official decree. In August, however, the Taliban’s top spokesman, Zabihullah Mujahid, told the New York Times that because music was “forbidden in Islam,” it would “not be allowed in public,” and the Taliban “hoped to persuade people not to listen to it.” 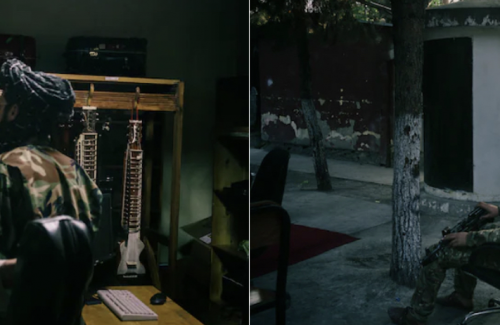 Since then, ANIM’s position has been imperiled. Afghan girls’ secondary education is in jeopardy. Fearing possible retribution, many ANIM students stopped playing music altogether and deleted their social media accounts to conceal affiliations with the school. As AFP reported, a number of students “rushed home, abandoning their beloved instruments,” soon learning that “Taliban militants had occupied the campus, turning its classrooms into dormitories,” while “armed guards cradle[d] Kalashnikovs in the courtyard” outside. Commandeered into use by the Technical Vocational Education and Training Authority (TVET) for other purposes, the school buildings remain inaccessible to ANIM faculty and administration, its staff has been reassigned and its bank accounts are frozen.

Only by relocating outside the country could ANIM enable its students to realize their educational dreams and keep Afghan culture alive. Yet this was easier said than done. Earlier evacuation efforts met with one obstacle after another, including a failed airlift attempt in the last days of the U.S. presence. As the culmination of this challenging and at times discouraging process, today’s success represents a beacon of hope for those whose cultural rights are threatened, and a hard-won triumph of the artistic spirit.